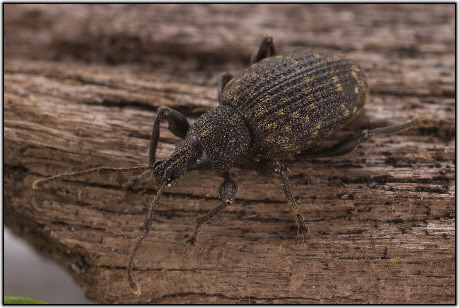 Root weevils are common invaders of Kootenay homes. Although a nuisance, they cause no harm to humans, pets or household furnishings.

The black vine and strawberry root weevil are the most common root weevils in BC and have similar life cycles.

Root weevils wander into homes most frequently during late June and July. Household migrations greatly increase during periods of hot, dry weather. The insects apparently are attracted to the moisture of the building. Inside homes, the root weevils cause no injury to humans or household furnishings. However, they can be quite abundant and a considerable nuisance.

Just why these insects are attracted to homes is unclear, but perhaps the houses provide shelter during the hot summer months when the insects are relatively inactive. Moisture sources in and around homes also attract the adult weevils. Because root weevils do no harm inside homes, the best way to handle infestations is to tolerate occasional beetles, vacuuming them as they are observed. However, if greater numbers are observed, a treatment can greatly reduce the amount of activity. For more information regarding a treatment, please call us anytime.

Control also includes sealing openings and screening windows to prevent entry. Root weevil populations can be reduced by removing plants around the outside of the home on which the Insects feed. These especially include Rhododendrons and Yews (or Taxus). Reducing watering around building foundations may limit root weevil migrations, as the adult insects appear attracted to shade and moisture. One of several types of root feeding weevils, the black vine weevil is the most destructive and widespread. A European native, it was most likely introduced accidentally in plant materials. Though first reported in 1910 in Connecticut, researchers suspect that it was introduced in the 1830s.

This weevil has spread by the movement of ornamental plants and thus is found throughout most of Canada. Facilitating its wide geographic range may be its rather flexible choice of foods—it feeds on over 100 plants, trees, shrubs and flowers.